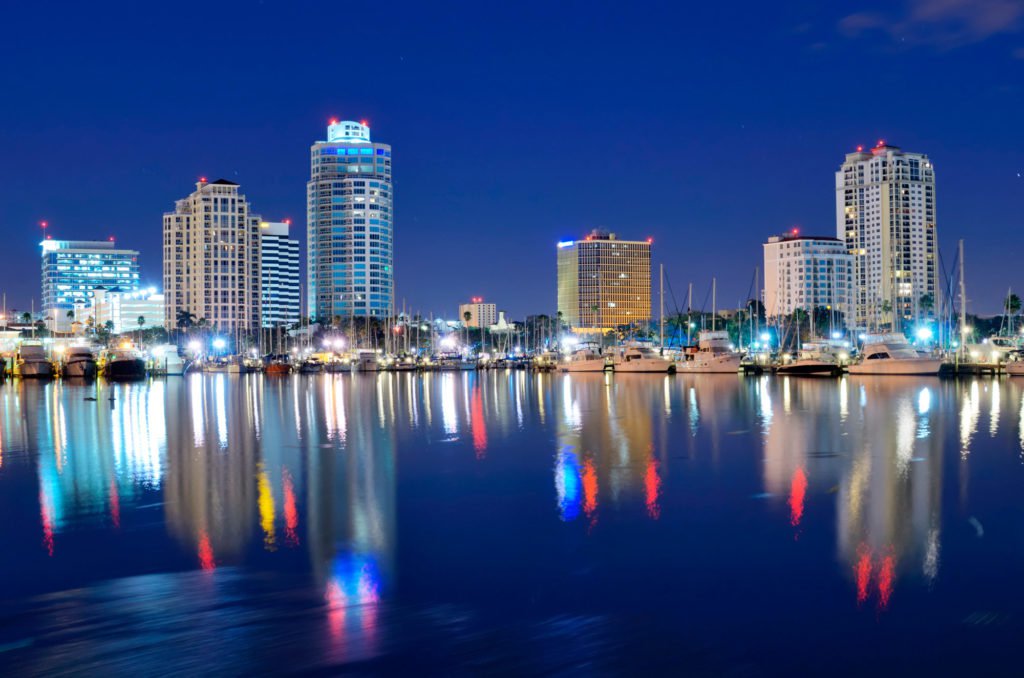 The heart of Pinellas County

St. Petersburg is a cosmopolitan city with a resort-town feel on the Gulf Coast of Florida, with numerous desirable aspects for people looking for St. Petersburg homes for sale. Greek, Russian, Cuban, German, and Vietnamese influences have molded the city, and St. Petersburg welcomes visitors and tourists from around the world every year. Single family homes and condos dominate this market, but townhomes, villas, and century-old craftsman bungalows can also be found in this area, and priced quite affordably, compared to other areas of Florida. There are several historical neighborhood districts with well established communities, boasting rich histories that go back a century or more. If you are considering St. Petersburg homes for sale, this city has a lot to offer besides great weather and beautiful beaches.

Two of the “founding fathers” of St. Petersburg were General John Williams and Peter Demens (pronounced de MENS). Williams bought 2,500 acres of land on Tampa Bay in 1875, imagining a beautiful city dotted with parks and thriving commerce. A little over a decade later, Demens bought the Orange Belt Railway and built the line into what is now St. Petersburg, opening up a route to bring people and material to the area. Legend has it that Williams and Demens flipped a coin for the right to name the city, and Demens won, selecting the name of his birthplace, St. Petersburg, Russia. Had the toss gone the other way, this city might be called Williamsburg, Florida instead. Williams is commemorated with Williams Park in the heart of downtown, and Demens Park is situated on the waterfront, near where his railway line once had a pier for loading and unloading from ships.

Many people considering St. Petersburg homes for sale are drawn here for our cultural attractions. St. Petersburg has several world class museums, including the world renowned Dali Museum, the Museum of Fine Arts, the Florida Holocaust Museum, the Morean Art Center, the Chihuly Collection, and many more, along with dozens of art galleries across the city. The St. Petersburg Opera company puts on several productions per year, typically to rave reviews, and there are a number of fantastic theater venues in the city, including the American Stage Theatre Company, the freeFall Theatre, and the St. Petersburg City Theatre.

Party the night away

Downtown St. Petersburg has become a vibrant restaurant and entertainment district, with everything from food trucks to fine dining, wine bars to craft microbreweries, and quiet jazz piano bars to thumping dance clubs. Many people looking at St. Petersburg homes for sale want to be close to this electric atmosphere downtown, and try to buy in the Old Northeast neighborhood and the Snell Isle neighborhood. You can stroll to fantastic venues downtown for concerts and shows, such as the Palladium Theater, the historic State Theater, and the beautiful Mahaffey Theater, which all draw world class performers.

Want to know more about St. Petersburg homes for sale?

Great bungalow on a large corner lot. Located in a quiet neighborhood but close to the downtown area. The original house build was a 1948 log wood cabin which shows on t...

Waterfront! Downstairs! 2 Bedroom 2 Full bathrooms with its own covered parking in Waterside at Coquina Key North where sunsets are always glorious and watching the dolph...

Space and light are your first thoughts when you enter this modern downtown loft with two bedrooms and two baths. The open concept living area has modern features, includ...

Here is your opportunity for a top floor 2 bedroom 1 bathroom condo located in the A building of Disston Arms which is located in Central St Petersburg. 10 minutes to dow...

Conveniently located on a quiet circle and lovingly cared for by its second owner. Spacious, light and bright with an open concept from living room to eating in kitchen....

3/2 BEAUTIFUL UPDATED HOME ON A SPACIOUS CORNER LOT (56x131) WITH NEW VINYL FENCE WITH ROOM FOR A POOL AND A CAMPER/BOAT OR ROOM ADDITION. NEW LARGE SHED IN BACKYARD. T...

Centrally located 2 bed 2 back in quiet neighborhood with large fenced backyard. Room for a pool and carport. House has newer roof and appliances in kitchen. Front enc...